Obviously I know that this battle is not all encompassing of the best coffee each state has to offer. Obviously the odds are stacked in Portland’s favor to win. Obviously I don’t care about journalistic integrity. So here’s the line up!

Representing New York City (because NYC coffee rivals that of Portland and the pound of beans brought as souvenir from Mr. Adventure initiated this rivalry) – Ninth Street Espresso
Representing Albuquerque (because that’s my OG home turf and fills the ghetto hole in my heart) – Satellite Coffee Company. If you visit here, try the Turkish Latte with honey and tarragon or the Mocha En Fuego with ancho chile and cinnamon.
Representing Boise by way of Nampa (because Mr. Adventure visited there last month and for no other reason) – Flying M Coffee
Representing Portland (just because) – Water Avenue Coffee
Representing Portland (because we couldn’t pick just one) – Stumptown Coffee

Before a weekend getaway in a cabin near Mount Hood, I ground and packed up all the contestants offerings and my trusty French Press. 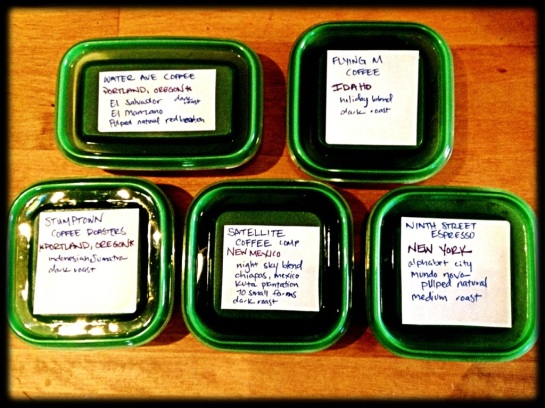 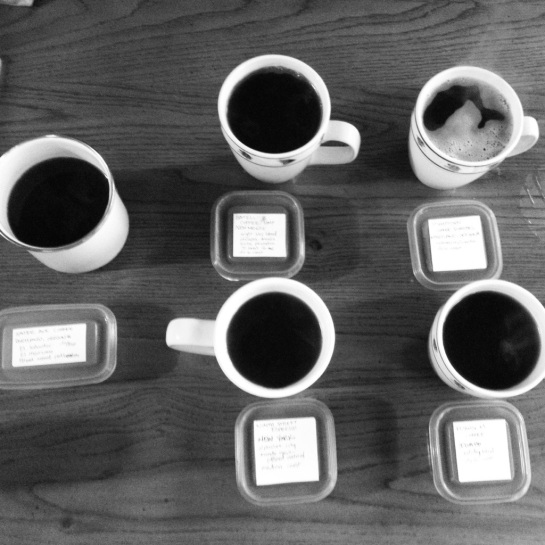 They were all brewed the same way, using the same measurements in the same machine. So it took a long time. One huge mug per roast. By the time they were all ready (about an hour later) we sampled the spread.

The mug that came out on top was the Stumptown roast. Delicious, smooth flavor. Very little bitterness. Rich and bold. This is why Stumptown is Portland’s favorite roaster.
Coming in a close second was New York’s Ninth Street Espresso. Slight bitterness. Sweet undertones. Okay, NYC is pretty good.
Coming in third was Albuquerque’s finest, Satellite Coffee’s darkest roast. These beans were so dark, they were oily in my fingers. The smell and the taste is unique and interesting. The coffee tastes dirty (in a good way) and leaves dark rings around the mug. Albuquerque also specializes in pinon roasted beans, which weren’t represented in the battle but are equally delicious and unique.
A begrudging fourth place award goes to Water Avenue Coffee. This is my absolute favorite everyday coffee. It is so rich with flavor and aroma that it becomes frothy in the French Press and the genuine coffee flavor is irresistible. It is how you imagine coffee tastes, but better. I was absolutely positive Water Avenue would come out on top. Unfortunately, the beans we used for the contest had been ground and then frozen for over two months. This is a method I have often used to make my beans last longer, but a side by side comparison proves that it’s not a good method for storing. The cup was lackluster and dull next to the others. If this were a fresh ground being compared to the others, it would most definitely be #1, and all the others would move down a slot.
I think you can imagine that Idahoan coffee is not was Idahoan’s are known for. This Christmas blend was spicy and herbal with notes of anise. It was good, but couldn’t stand up next to the others. But keep your head up, Idaho. You’ve still got potatoes.